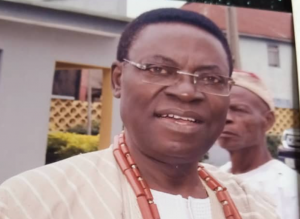 One day at about 5pm, I was watching a football match in the school ‘s front football pitch, when Brother Thomas, driving into the school premises, suddenly started calling me. Getting to his car he said I should quickly run to the main road and call a woman carrying two bunches of bananas.
Shortly after he walked up to us and asked me to request for the price of the bunches of the bananas, she was carrying on her head. Obviously, part of my duty was to negotiate with the woman. Interestingly, the woman seeing a white man decided to go for a kill. She asked for seven shillings, and I told Brother Thomas that it was too expensive and will not cost more than two shillings in the market. However, seeing that he was really interested in the bananas I asked the woman to take five shillings which she happily accepted. In line with Yoruba bargaining culture, I now asked the woman if she would take three shillings. From her body language and facial expression, I knew she would accept this but to my surprise before she could say ‘yes’ Brother Thomas had already brought out five shillings which he handed over to the woman. On our way back, Brother Thomas taught me a great lesson in compassion and selflessness. He said the bargain we had with the woman was a good one. According to him, a good bargain is one in which both parties are happy. The woman was happy because she knew she had cheated us, and he also was happy because the bunch of bananas in his country would cost him at least three dollars (about two pounds in Nigeria then). So, they were both happy. What a lesson in selflessness and compassion.
Rev Brother Thomas McCrea, I am joining the multitude of your admirers in wishing you a happy and joyous 90th birthday celebrations. You have devoted your entire life in the service of God and humanity. May the good Lord grant you the grace to witness many more anniversaries in divine health and sound mind. CONGRATULATIONS!!!